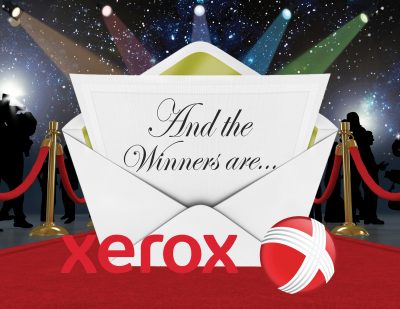 What technologies are on the cusp of advancing the print industry?

That’s exactly what the Printing Industries of America (PIA) sets out to determine through their prestigious InterTech Awards program. These awards are to our industry what the Oscars are for film.

The objective? To identify technologies that are truly innovative and expected to advance the performance of the graphic communications industry.

To assist, they assemble a panel of about a dozen experts—mostly managers and executives at medium to large printing companies—who read hundreds of pages of technology descriptions and testimonials submitted by entrants, then meet to debate the technologies’ merits.

“We’re looking for technology that is likely to have a significant impact and stands out among similar technology if there is any,” said Jim Workman, Vice President, Center for Technology and Research, Printing Industries of America, who manages the InterTech Awards Program. “The judges ask themselves, ‘Does it really advance the state of the industry? Does it make things less expensive or open up new opportunities for a printing company?’”

In the case of two Xerox technologies, the answers were, “Yes.”

After helping differentiate print providers’ businesses for more than a year, and garnering countless positive reviews along the way, the Metallic Dry Inks of the Xerox Color 800i/1000i Press and the Ultra HD Resolution of the Xerox Versant 2100 Press have been honored with the highest endorsement the industry has to offer. 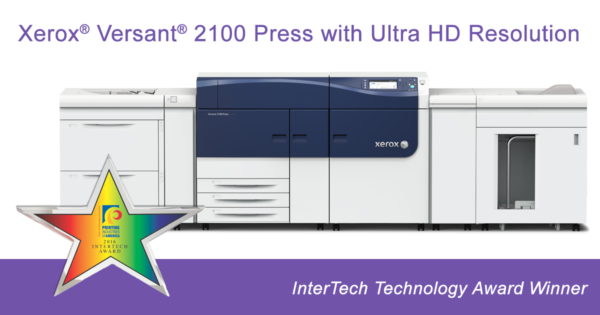 “Printing companies today often warn digital print customers when jobs contain elements that may be prone to jaggedness and stepping,” Workman said. “With HD Resolution that concern diminishes.” The judges were even more definitive: “With the Versant 2100’s resolution increase, there’s no longer a reason to avoid the elements that used to be a problem for digital print—gradients, thin fonts and vector graphics.”

One reason the Versant 2100’s delivers superior image quality is that it captures more imaging information than other presses. Its Ultra HD Resolution of 1200 x 1200 dots per inch (dpi) is maintained throughout the imaging chain (from the print server to the laser output), delivering four times the resolution of other presses. Also critical is benchmark color depth of 10 bits, enabling the press to print each of the four primary colors (CMYK) at any of 1,024 shades, compared to 256 shades with standard 8-bit color.brett-coltman-color-wheel

Direct Technologies, Inc. of Suwanee, Ga., has multiple Versant 2100s. “The color, the clarity, the quality, the uptime, the accessibility, the user friendliness, are all outstanding features of this machine,” said the company’s Manager of Laser Printing, Eric Anderson. 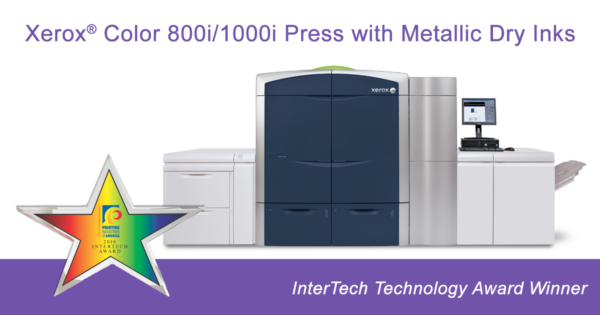 The Metallic Dry Inks of the Xerox Color 800i/1000i Press enable the first digital printing that rivals the metallic quality of traditional foil stamping. As a foil-stamping alternative, these inks enable the added value of variable and on-demand metallic printing, while reducing costs by eliminating custom dies, eliminating waste, and boosting productivity with an in-line workflow. The result: new opportunities for print providers to generate new revenues with high-value applications that expand and differentiate the shop’s offerings.

Engineers at Fuji Xerox developed the toner by applying the approach used for creating the Color 800i/1000i Press’s EA toner—controlled assembly of nanoscale polymer droplets to build evenly shaped toner particles. Flat metallic flakes were used as reflective pigment particles, and ellipsoid-shaped toner particles were developed to fully contain the flakes and orient them in the same direction to optimize reflectivity. The result is a flop index (measure of reflectivity) that is among the highest in the industry.

One judge commented, “I think this is a game changer; I wish I had the capability on the presses I currently run.” Others were impressed that the toner, which is applied from an optional fifth housing station, is an add-on that extends the value of a press investment.

The awards—six in total, with two going to Xerox—will be presented at the 2016 Printing Industries of America Premier Print Awards and InterTech Technology Awards Gala, Sept. 25 in Orlando, Fla., during Graph Expo. In addition, the Xerox Versant 2100 will be on display in the Xerox booth at the show—along with five Must See Ems Award winners—and a booklet showcasing all of this year’s entries will be available on the Web at: www.printing.org/InterTech.

According to PIA research, more than 80 percent of InterTech award recipients experience continued commercial success, so the odds are good that Ultra HD Resolution technology and Metallic Dry Inks still have a lot of runway to drive business for leading print providers.

To learn more about our Xerox Production Print Solutions, contact one of our Image Source product specialists at 1-800-336-1642, or click the link below to fill out an information request form.

Image Source is America’s #1 Xerox Agency. Serving California since 1988, they offer a full line of Copiers, Multifunction, All-in-One, Wide Format and 3D Printers, and more. A leader in Managed Print Services, they help their customers capture the full potential of their investment in hardware and cloud services. Image Source has helped both large and small organizations – in every industry from healthcare to education and manufacturing – to achieve better financial results, improve operational efficiency and reduce their environmental impact.